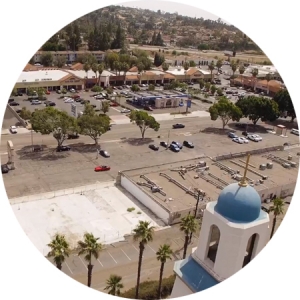 IPS first convened the Casa de Oro Alliance at a community forum in September 2015.  At that event, members of IPS’s East County Youth Coalition presented the results of assessments they conducted at local liquor stores in Casa de Oro. The assessments indicated a serious lack of compliance with state retail operating standards for alcohol retailers, an over-concentration of alcohol outlets, and the perception that the community was unsafe. The top causes of community problems included public intoxication, cannabis and other drug use, drug sales and underage drinking.

Fifteen residents and business owners attended the forum. The group decided to meet again because they were frustrated by the excessive number of alcohol outlets, illegal pot shops, and a growing number of vape lounges, hookah bars, and smoke shops selling drug paraphernalia in the area. Attendance reached 50 by the third meeting. The consensus among the group was that, at one time, Casa de Oro had been a community they were proud to call home. Yet, it had been deteriorating for years and had become a dumping ground for many undesirable businesses.

At the fourth meeting, the group elected a resident and property owner in the CDO area to chair the group. The group chose to call themselves the Casa de Oro Alliance. At this point, more than 150 people had attended at least one meeting, and a core group emerged, attending almost every meeting after.

Within six months, the Alliance developed a vision and identified goals, objectives, and strategies. The Alliance’s vision is a historically rich, culturally diverse, thriving community that is attractive, safe, pedestrian-friendly, and a popular destination for dining, entertainment and shopping.

The Alliance quickly developed a robust infrastructure and had many early successes. Six committees formed–all led by volunteer community members. The committees include Business Improvement, Code Enforcement, Crime Prevention, Beautification & Community Events, Policy Development, Media and Outreach, as well as a Steering Committee made up of all the committee chairs.

Now, a new library and community center are in the works, as are landscaping projects, including sidewalk planters, additional garbage cans and trash pick-up, painted curbs and electrical boxes, new bus benches, flags for light poles, and a welcome sign. The county responded to the group’s requests by securing funding for a Specific Plan that included changes in street design, codes to attract desirable business development and measures to hold existing risk-related businesses accountable for blight and nuisance activity.

This neglected community is well on its way to becoming a House of Gold once again. IPS has been honored to support the Alliance every step of the way.